A lifelong resident of Newburyport and valued Institution for Savings employee for more than 38 years, Pat Connelly was truly the face of our Bank. Pat's sudden passing this past June left her co-workers, family and many friends reeling and desirous to do something to honor Pat's memory and beautiful spirit. The Pat-Walk for a Cure will bring us all together - even virtually - to celebrate Pat's memory while raising funds for the Gerrish Breast Care Center at Anna Jaques Hospital, one of Pat's favorite causes.
In the last few years, we have partnered with Anna Jaques Hospital to present 'Couture for a Cure', a fashion show featuring cancer survivors and their caregivers walking the runway to raise funds for the Gerrish Breast Care Center. Pat was instrumental in helping to plan this event and it was one of her favorites. This year's 'catwalk' will celebrate Pat's 'passion for fashion' as well as her love of felines, but most importantly her commitment to doing everything she could to brighten the days of those in need.
Walk Details
Walk Route 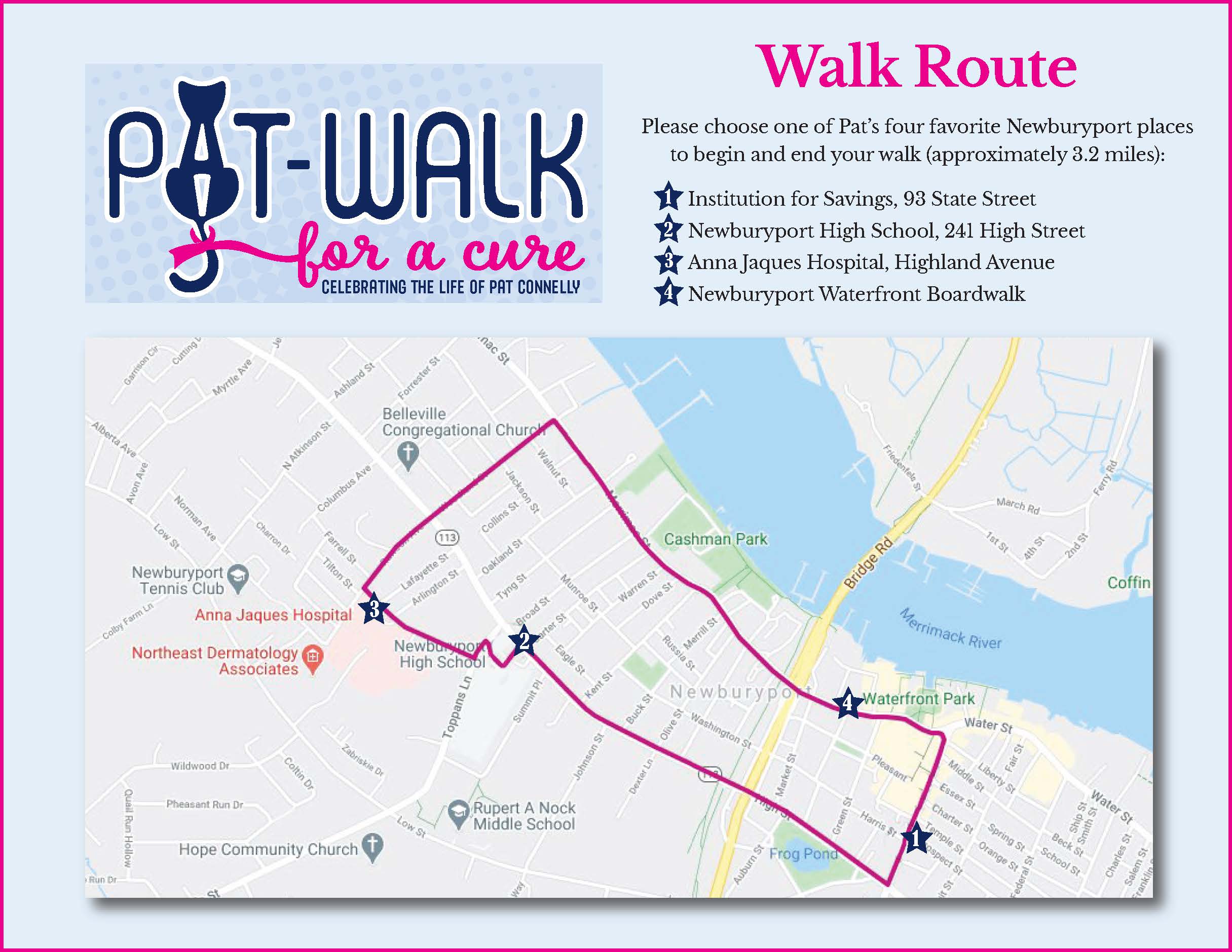 How to Register for the Walk!
Advance registration is appreciated and required to receive a complimentary t-shirt. To register, please visit Anna Jaques Hospital's Celebrating Survivors.
About Pat
Pat was born December 2, 1946 in Newburyport, the daughter of the late Harriett and Vincent Connelly.
She graduated from Newburyport High School in 1964. Pat went on to secretarial school in Boston before working for the City of Newburyport for many years. She was employed with the Newburyport Redevelopment Authority and later secretary to Mayor Byron J. Mathews and Assistant to City Clerk George H. Lawler, Jr. Pat served as Newburyport Ward 5 City Councilor in 1972 and 1973.
Pat's second home was the Institution for Savings where she was working at the time of her passing. As a 38-year employee of the Bank, Pat was truly the 'face' of the Institution for Savings. She started her career in 1982 as a teller when the Bank had only two offices and 20 employees. Her genuine warmth and desire to help everyone made her a favorite among her many customers who still came to her for assistance even after she was promoted to Clerk of the Corporation in 1995 and, later, Vice President in 2019. She loved going to work every day, she loved her co-workers and she loved being a part of the Bank.
Pat also loved the City of Newburyport where she grew up, lived and worked and was passionate about making the days and lives better for everyone she knew. Right up until her passing, Pat remained enthusiastically involved in the community of Newburyport, having served on many boards and contributing her resources and time to so many non-profit organizations.
Pat's love extended beyond her city, friends and co-workers. She was a passionate lover of cats and volunteered for many years at the Merrimack River Feline Rescue Society. Pat also enjoyed Greek food, thanks to her family heritage, and was known to be an early and frequent patron of the Greek Food Festival during Yankee Homecoming every year.
Pat was also an avid Boston Celtics fan; when she wasn't enjoying games from the Bank's season ticket seats, she would stay up all hours to cheer on the team from home. Pat often said that one of the highlights of her life was meeting her beloved Tommy Heinsohn several years ago at the Boston Garden's center court.
Pat was honored in 2018 when she was recognized with a coveted Paul Harris Fellow by the Newburyport Rotary Club, an award given to those who follow the Rotary mantra "service above self". In 2019, she received the Peace Prize Award from the Newburyport Human Right's Commission, an honor recognizing those who embody the values of the commission - inclusion, diversity and acceptance.
Pat's heart of gold touched the lives of many. We will miss her beautiful eyes and smile, sense of humor, intelligence and most importantly her kindness. She was and will remain a true inspiration for all of us.
About the Gerrish Breast Care Center at Anna Jaques Hospital

The Gerrish Breast Care Center at Anna Jaques Hospital officially opened on October 17, 2013. Whether patients need routine screening or advanced treatment, it can be a partner every step of the way.

Named in honor of a major donation from the Gerrish Family Foundation, the Center brings together an experienced team of professionals and resources to ensure the highest standard of care and seamless coordination of services for every patient who walks through our doors. The Center is affiliated with Beth Israel Deaconess Medical Center which means Boston specialists are a part of patients' care team.

The Gerrish Breast Care Center is committed to providing the best experience possible.3-D Mammography, the most advanced technology available, is now offered at its three locations in Newburyport, Haverhill, and Amesbury. Patients receive their initial screening results within two business days, and the Center's dedicated Patient Navigator assists and supports patients through additional tests and treatment if needed.

Read more on our accessibility statement